Hooray! While I usually can’t get enough of the local auctions here in South Jersey, so far this year I haven’t had NEAR enough! I’ve been so busy laying groundwork for the Phillies Wives big Covenant House makeover project that I’ve neglected to pursue my true happiness – AUCTIONS!

I made two today. And I could have scored BIG had I not been – (a) late and (b) chicken shit. I previewed one auction yesterday and had my sights set on these fab lamps: 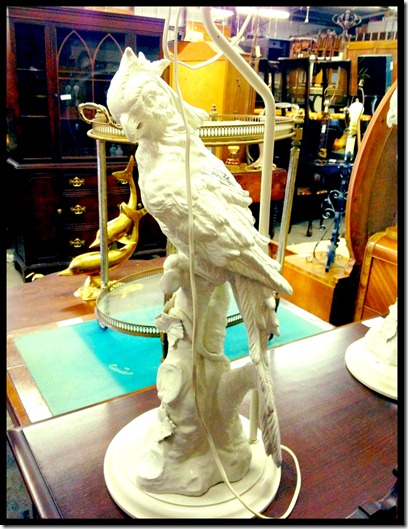 There was a pair. And they were big and bodacious. Gloss white ceramic with nary a chip, crack or craze. I couldn’t believe them, so smart and richly detailed. 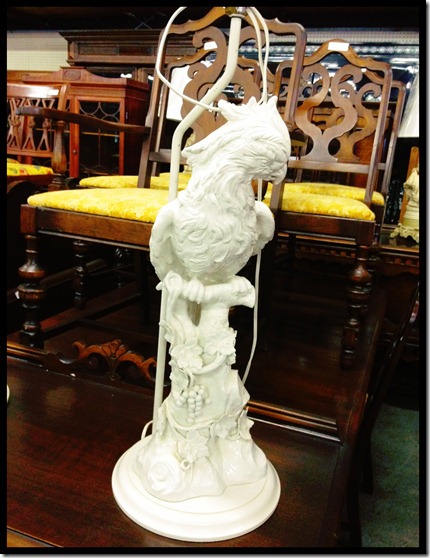 Even without a place to put them, I bragged how I would easily spend $200 apiece if I could only make it in time to the auction to bid. YUUUP!!!

I did make it. Just in time. It was stunning to see them sitting there in all their glory and I was hyperventilating as I rushed to get my bidder number. I jumped into the bidding at 20 bucks and  predetermined that I would stay in until 200 if I had to. They were being auctioned at 2X the money but I wasn’t afraid. I really wanted them. In the blink of an eye, I was at 80 apiece, someone went 90, the auctioneer looked at me for 100 and I dropped my head and dropped out. WTF!! It all happens in, literally, 15 seconds or less. That’s all the time it took for some alien part of me to run like a scared little puppy and let someone else take my lamps away.

I tried to console myself by saying that I have no place for them. UH, HULLLLO – Century Storage, Storage Center and Extra Space Storage. I actually have three places they could have gone. WITH THE REST OF MY HOARD!!!

I did get back in the saddle – and quickly – in time to snag these: 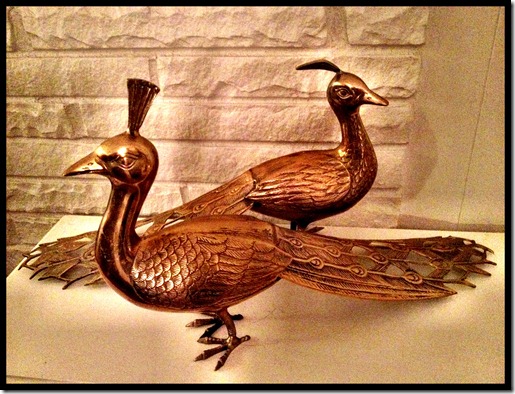 Also big and beautiful and $15 apiece… so I thought. They too were being sold at “2X the money”, but when I went to pay, it was $15 for the pair! Because that’s how the auctioneer’s assistant had entered them into the computer. My gosh, if the lamp winning peeps got those two ginormous, beautiful lamps for $90 the pair – they got a heck of a deal. That’s the kind of shit that goes down at auctions. That’s way I never want to be away so long again.

I don’t know what these 2 went for, but by the time I got to the second auction some dealer had already won ‘em and slapped their sticker on: 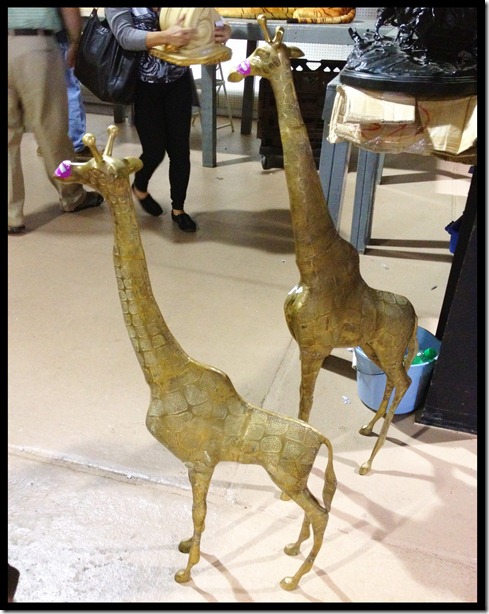 They were quite a handsome pair and I swear, I would have paid $200 apiece for them if only I had had the chance.  Maybe more.

Posted by Design Junkie at 7:22 PM

What you got for me?

Put This in Your I.V.

Design Junkie
With a newly renovated home, multitudinous decorating projects on tap, a library stacked with design books, an addiction to shelter rags, and a scout’s eye for new products and resources, I reckon I’ve got about as much to say as the next guy who’s commentating on style and design and seeking to inspire. So here I am, late to the party, but enthusiastic none-the-less, ready to throw my voice into the blogging hurly-burly. (As soon as I figure out my camera and Blogger.)